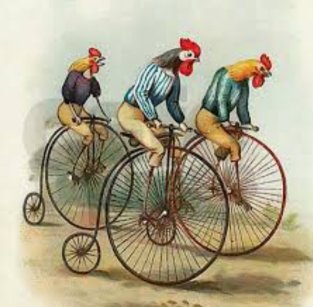 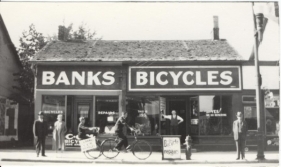 TheBicycleMuseum.ca is a virtual bicycle museum project by Dandyhorse Media Inc. that will co-host pop-up bricks-and-mortar bicycle museum exhibits, starting with one at B!KE in Peterborough, on Nov. 2, followed by one at the library on Dec. 3, 2018.

What we hope it will be.

Do you have a story to tell about bicycle history in your community? Do you know more about the images on TheBicycleMuseum.ca? Do you have an idea for a pop-up location or topic? We want to hear from you! Email thebicyclemuseumptbo@gmail.com

History is important. Peterborough has a rich cycling history that goes back over 100 years. Peterborough held the first provincial meet (race and parade) of the Canadian Wheelmen’s Association in 1898. The Peterborough Cycling Club is one of the longest standing (rolling?) clubs in Canada and is currently the largest cycling group per capita in the country! Modern cycling history is in the making right here, right now! We believe that Peterborough can once again because a truly bike-friendly city.

THE BIKE: The high wheel or penny farthing bicycle on display in this exhibit is a replica that was imported from England in 1967 via Banks Bicycle’s for Dr. Willoughby Belch in time for a Centennial celebration held at Jackson Park. Dr. Belch’s son, Tim, will be in attendance at the launch to tell us what this amazing big wheel bicycle has meant to his family.

THE RACES: Did you know Peterborough was the first city to host a provincial meet under the Canadian Wheelmen’s Association banner? On July 1, 1989, almost 7,000 people put Peterborough on the map with races and parade that made headlines.

THE ART: Bicycles were so popular at the turn of the century they were used to sell everything. See a beautiful blue heron ‘take flight’ on a big wheel bike (original art by Ian Sullivan Cant) along with fun anecdotes and advertisements from some of the top shops of the time at TheBicycleMuseum.ca/portfolio under ‘The art’ and ‘The shops’.

Find our more at TheBicycleMuseum.ca

Check out the portfolio page for all our bicycle museum stories and images.